Angèle and her scalpels 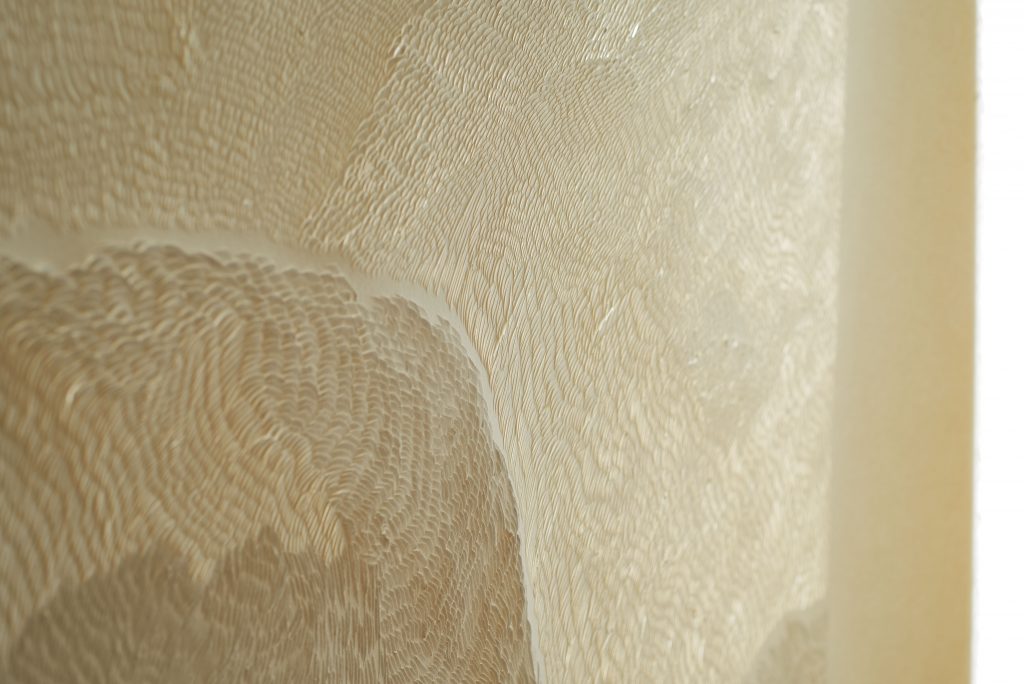 Her drawings are as beautiful as her name. Angèle already knows perfectly how to use pencils and – thanks to it – brings to life many imaginary landscapes, shores and rock faults. There is however another tool that she particularly enjoys using: the scalpel. Today, I would like to introduce you to these amazing artworks.

When I first entered her studio in Belleville, Angèle was working on a commission. A large sheet of thick paper was placed on the table. She was circulating around it, a scalpel in her hand. With the help of this blade, she incised the paper in cadence and let appear a field of scales. Smaller sizes were hung on walls behind her. I just found them beautiful. The paradox between the visual rendering – poetic, refined, full of sweetness – and the gesture made to get them – clear, precise, sudden – seemed very attractive to me. 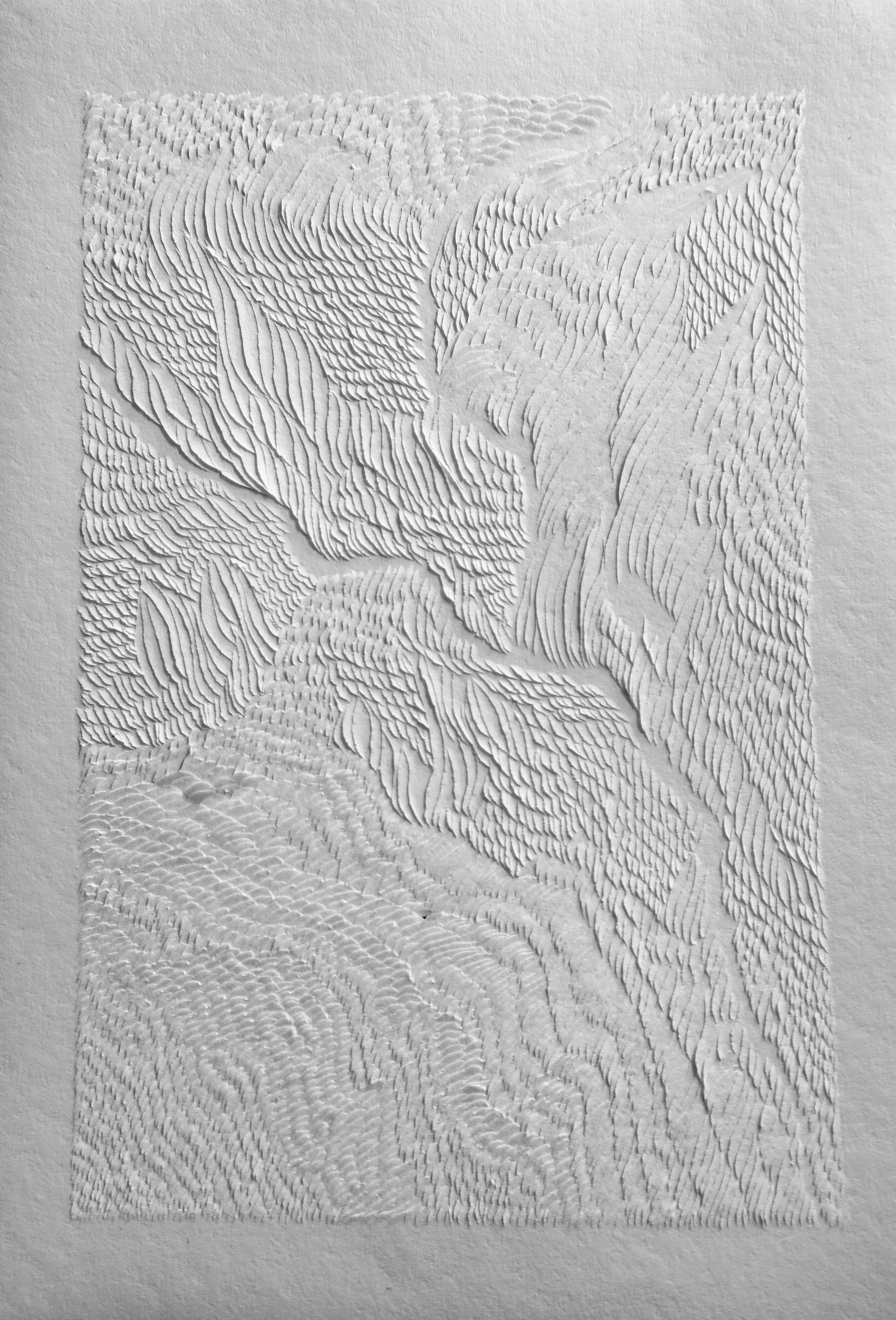 After studying at the Beaux-Arts School in Paris, Angèle decided to take a look at fine arts bookbinding. Covers were mostly made out of leather so she had to use scalpels to cut it. She learned to handle the tool but also to respect the material by preparing her gesture, delicate and violent at the same time. Paper, like leather, does not offer a second chance. In case of skidding in the incision, you have to start all over again.

When beginning a drawing, she never knows how it will look like at the end.
Angèle starts with an intention. It can be, for example, to fill up the sheet entirely, partially, from the center or converge the forms towards the center. Then, the drawing comes alive gradually. “I do not try to represent anything figurative or precise, they are almost only sensations”.
Let me tell you that Angèle’s artworks are generating more and more interest. She recently got commissioned by the Hotel de Paris in Monte Carlo to produce a series of drawings and is currently working on two very large formats for the Black Sea Resort in Georgia. Don’t worry though, she will be able to work on small and medium formats again from mid-June.

You fell in love with her drawings and want to order one ? Don’t hesitate to drop me an email : alexia.rigault@mursblancs.com

I’ll send you more drawings to help you decide which type you wish to order. If you want, I can also introduce you to Angèle. 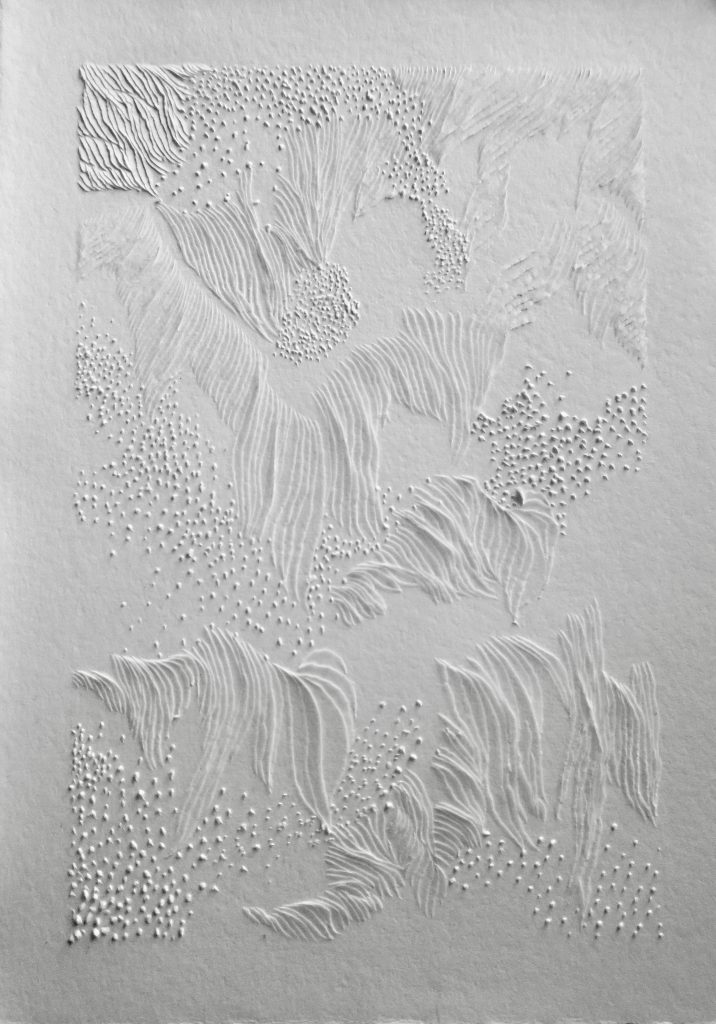